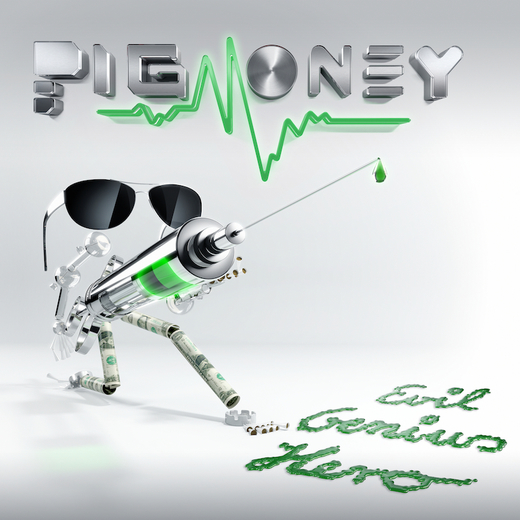 The band consists of Chance Villegas (Lead Vocals/Drums), Joe Villegas (Guitar/Vocals), and Parks (Bass/Vocals). They originate out of Tucson, AZ, where they grew up as childhood friends in the same neighborhood. Pigmoney wasn’t formed until they were in their early 20’s and moved away from their hometown. The name Pigmoney was created on the trip between Arizona and California. They were pulled over for speeding and the magic happened when Joe got the ticket and said, “Damn it! Why are we always giving these Pigs money?” Thus, Pigmoney was born.
Pigmoney’s self titled debut E.P. was released in 2007, and they are now currently recording their first full-length album, entitled “Evil Genius Hero.” For this effort, Pigmoney has teamed up with legendary engineer/producer Michael Blum (Titan Recording). Michael engineered several Madonna LPs, including "Like A Prayer" (Triple Platinum) and the soundtrack to the movie "Who's That Girl" (Platinum). He has also had the opportunity to work with such superstar talent as Pink Floyd, Bryan Ferry, Kenny Loggins, Julian Lennon, Meredith Brooks, Peter Cetera, and Jody Watley, among others.
The lyrics and music to their songs are written by all three members of the band. The name Pigmoney has driven the lyrical content to consist of topics like Power, Money, Control and Struggle. The “Evil Genius Hero” album (to be released) is going forward with the same ideas. With lines like “Can’t stop us now” (Touch My Body), “How do we change this design?” (Make it Last), and “How did it come to this?” (System Somatic), Pigmoney shows the desire to create change and become truly free.
Over the course of their time together, each member of the band has become a better writer and a better player. Chance now sings and plays highly energetic drums at the same time, while Joe and Parks contribute their voices to all of the songs, making Pigmoney stand out in the rock genre. The sound they have created is fearless and they are highly anticipating the release of their new album, “Evil Genius Hero.”