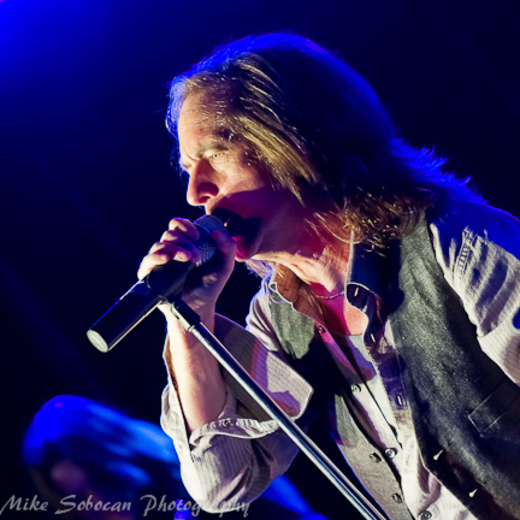 A two time Canadian Juno Award nominee Russ“Dwarf” Graham has also sold close to two million records worldwide and has had a career spanning more than 30 years. Russ was the co-founder of the KiLLeR DWaRFs in 1981. He and the KiLLeR DWaRFs quickly gained international success, first in Canada with the Juno nominated self-titled KiLLeR DWaRFs debut album in 1983 with Attic Records which was produced by Doug Hill. His break-through in the United States came when San Antonio based radio personality Joe Anthony started spinning their album on a regular basis, much to the delight of hard rocking Texans. This planted the seeds for what would result in KiLLeR DWaRFs  receiving a lot of attention south of Canada's border. Using his own money, the band cut the iconic and now highly sought after album STAND TALL in '86 on Maze/A&M Records in Canada, and Grudge Records stateside. Russ and the band toured relentlessly in support of it. The first single, "Keep the Spirit Alive," was an anthem of the times. Much Music’s new Pepsi Power Hour provided substantial airplay for the his hits "Stand Tall " and “Keep The Spirit Alive” in Canada, while MTV provided great American exposure for Russ and the band. MTV soon put the band's videos for "Keep The Spirit Alive" and "Stand Tall" on a 13-week rotation allowing the album to sell an unprecedented 80,000 copies during that time. (It has now surpassed the 100000 units sold and has sold on EBay for as much as $500!) By the spring of 1987, the video became the most requested video on MTV, setting a record that would take years to overcome. It still holds the record for MTV's most-requested independent video of all time. A second video Stand Tall was greeted with similar accolades. The exposure led to Russ hosting the MTV "Head banger’s Ball" with Rob Halford of Judas Priest in 1987. With the addition of national tours of the United States and Canada the exposure got Russ and the band noticed and brought Sony/Epic Records to their door offering a multimillion dollar worldwide recording contract. Russ first album with Sony/Epic was BIG DEAL. It was recorded again in Toronto and produced by Simon Halhart, whose previous credits included the likes of Saxon and Marillion, Big Deal continued on the road the band had paved for itself with hits like "Starting To Shine", "Power" and the anthem like "Desperados" assisted the single "We Stand Alone" in showing the world Russ and the KiLLeR DWaRFs  were a world-class metal outfit. That year they went on tour to support Iron Maiden across Europe on a sold out tour and appearing at several outdoor rock festivals here and overseas. The next year, Russ and the band moved operations from Toronto to Los Angeles to record "Dirty Weapons" with award-winning and much sought after producer Andy Johns (Rolling Stones, Led Zeppelin, Rod Stewart, VAN HALEN, ERIC CLAPTON, BON JOVI and Cinderella).Released in 1990, the resulting album sported 'Doesn't Matter' – Russ' first radio hit in the USA. The song went to #1 in thirteen cities, including two major stations in Los Angeles. The title track, 'Dirty Weapons,' also became a smash hit and a standard on MTV's Headbanger's Ball program In 1991 Russ and The KiLLeR DWaRFs  were nominated for a Juno award for Best Hard Rock Group. The following year saw the release of METHOD TO THE MADNESS also with Andy Johns in the producer’s chair. This album was touted to be one of the best hard rock albums Canada ever produced, including the title track, "Hard Luck Town" and "Cowboys and Conmen " along with the chart topping  "Driftin Back" power ballad. After a few years of touring in support of METHOD TO THE MADNESS, Russ and his band parted ways with Sony/Epic.

After taking a short break from touring, Russ Dwarf completed his first solo album “Penny Black” with Goddo's legendary guitar player Gino Scarpelli, as well as working and recording with a number of other world class artists. During this time Russ also played live with a number of local players. After completing his first solo CD, Russ and the KiLLeR DWaRFs  decided to have a “Reunion” to tie up some lose ends from the past. Recording a Live CD/DVD in their hometown Toronto in 2001, which was simulcast live across to locations in US and Canada. This coincided with a few years of dates for the band in North America.

Russ has played some of the largest venues around the world including Wembley Arena, Hammersmith Odeon, as well as Toronto's historic CNE Grandstand, Ricoh Coliseum. He has also performed on many of the largest festival stages and amphitheatres in the US and Canada. He has also toured and shared the stage with such world renown artists such as Iron Maiden, Ronnie James Dio, Michael Schenker, Accept, Saxon, Yngwie Malmsteen, Queensryche, Accept, Anvil, Goddo, Warrant, Y&T, Fear Factory, Skid Row, Pantera, Firehouse, John Corabi, and the legendary Nazareth. Russ has also appeared on “The Mike Bullard Show" and also on TSN performing "The Hockey Song" in '2003

Russ is currently the lead singer for Canadian Rockers “MOXY” and also had his first release with his band “HardRoad” which includes Canadian veteran, Earl Johnson (Moxy).

Russ has recently taken on two new ventures. An all-acoustic show performing classics that span his entire career. Russ performs all the classics including some covers in a “Storytellers” style. Russ has also recently put a brand new band together, which is currently doing The Best Of The KiLLeR DWaRFs , MOXY and HardRoad.

Russ also has a new solo album is in the works again with Legendary producer/engineer Andy Johns who is set to produce it. The album has attracted the attention of many prolific artists in the metal world who will either guest on the project or assist with song-writing including present/past members of GUNS N' ROSES, WHITESNAKE, ALICE COOPER and MOTLEY CRUE AND RATT. Russ is also set to release and Acoustic CD (“Wireless”) of some of his greatest hits from the KiLLeR DWaRFs  era as well as a “lost” never before released KiLLeR DWaRFs  album entitled Start @ One.

Work is also currently under way on a documentary movie on Russ’ life and career tentatively titled “Tall Tales” which should be released in 2013/2014 as well as a book version to follow.