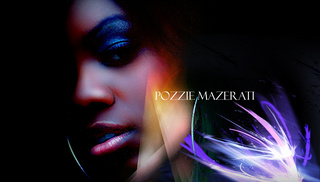 Have you ever dreamed of starring in a film wearing clothes you designed while performing a song you wrote and recorded? Pozzie has fulfilled that dream and is still reaching for the stars to achieve more.

Born Rosalind Lott, Rosalind received the name “Pozzie” from family. It was a childhood nickname that just stuck.

Pozzie was born to musician parents; her father a trained pianist, her mother a trained vocalist. It’s almost as if Pozzie was destined to pursue a career in music. But, Pozzie’s love didn’t begin with music. Instead her interest was sparked in Fashion. Being raised by her grandmother, a seamstress, Pozzie developed an interest in style and dress at an early age.

While in grade school, her father had her join a girl’s singing group, which was short, lived. However, the experience she gained from practicing and performing with the group planted a seed which would develop years later.

Pozzie graduated from college at the age of twenty. Having been skipped from kindergarten to 2nd grade as a tot contributed to her always being youngest in her class.
After receiving her degree, Pozzie started her own clothing line. She debuted for Mercedes Benz Fashion Week in NY. Receiving write-ups from bloggers such as YBF (Young Black and Fabulous) was just the beginning.

Pozzie went on to do Costume Design for several feature films and music videos, many of which she appeared in with small roles.

Pozzie soon discovered that her love for fashion wasn’t enough. Her unfulfilled desire for music was still present and with that her music journey began. Pozzie’s first big break came when she played herself (female emcee) in an independent film “Stars N Stripes” in which she performed for a crowd. Her performance in that film opened the door for acting. She received acting roles in four additional films and one commercial.

The artist has music collaborations with several major, label, recording artists, on her album. The album includes a demonstration of her versatility in music including rapping and singing.