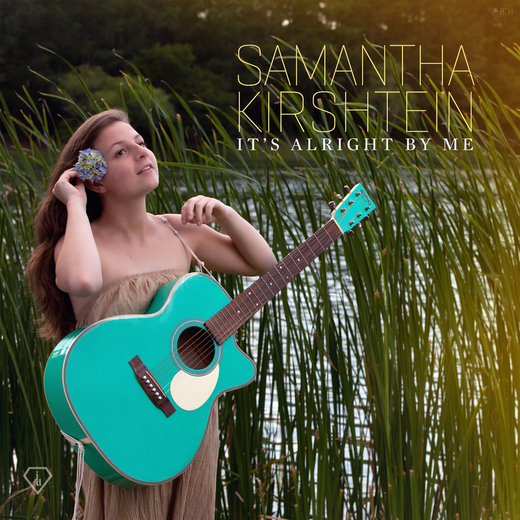 Samantha Kirshtein ‏@sammykirshtein           ANNOUNCEMENT!! Today 6/13/12 is the official release date of my new album, "It's Alright By Me" produced by Rick Beato. Here's the link:

http://www.cdbaby.com/AlbumDetails.aspx?AlbumID=samanthakirshtein2                                                                                                                        Born November 5th,1996. Samantha Levin Kirshtein, nicknames Mantha & Sam She started playing guitar in December of 2008. She has written many songs. She won the local Palmetto Acoustic open Mic challenge in Charleston, SC (a 12 year old competing against all adults), she first played in front an audience at a schools talent show back in December of 2008, just weeks after picking up a guitar, she played Taylor Swift’s ‘Best Day’ & Sweet Home Alabama. She has since played on a street corner in the Chas open air market during Spoleto, at Parson Jack’s cafe, Sunfire Grill, Dunleavy’s Pub, Hubee D's & Young’s Mountain Music in Burnsville, NC. She was also asked to open a 4 day benefit concert recently to aid the “Chas. County Band Instrument Fund” put on by Awendaw Green. Afterwards she was interviewed by a local radio station and asked to play her song “I Do Too” on air. She performed at The Dragon Boat Festival in Charleston (a cancer benefit). She opened for Grammy nominated Jennifer Knapp at The Windjammer. She also opened for Woodstock's own Marc Black at a 'Home' concert in Charleston, SC. There have been numerous ‘gigs’ including visits to Veteran’s Hospitals, Children’s Hospitals & Alzheimer’s and Assisted living centers. She has caught the attention of many here as well as some of Charleston’s veteran local musicians. She finished first in a 2 state competition put on by OurStage.com and was selected by Sarah McLachlan and Terry McBride to play a 30 minute set at a Lilith Fair concert in Raleigh, NC. Her song, 'I Do Too', has 2 first place finished in the Traditional Country category and a number 11 ranking on the overall country charts. She likes to garden and cook. She has been raised listening to such musicians as Bob Dylan, Beatles, Eagles, Janis Joplin, Bob Marley, Old Hank Williams and more. There seems to be some very natural or even spiritual connection in her voice and her songs, well beyond her years, that has a moving and profound effect on those that see and hear her. Samantha wrote the song ‘I Do Too’ about and for her grandfather. He was diagnosed with Alzheimer’s a few years ago. The two of them spent a lot of time in the garden and outdoors together. He is a very old fashioned guy that was capable of building, fixing or growing anything. He is a true patriot as was his father before him. The refrain in the song “Gd loves you and I do too, grand-babies” are the words he would always say to his 11 grandchildren.

Samantha released her debut EP in September 2010 when she was 13 years old. Since that time, she has won many opportunities on sites such as Indaba Music and has had numerous 1st place and top 10 finishes on OurStage. Some of her songs are on Pandora, Spotify, iHeart, Jango and Jelli Radio. She also has performed at many gigs in various venues. Samantha is very active in her high school choir. She also loves to act in her school's plays, especially musicals. Samantha has continued to write many songs. Her words, melody and voice tend to create a deep connection with her listeners.
After the release of her EP, in Sept. 2010, Samantha caught the ear of the late Johnny Diamond, (may he rest in peace) a music manager who was beloved by many. He connected Samantha with renowned producer, Rick Beato. Currently Samantha is recording her new album with Rick Beato at his studio in Stone Mountain, Ga. with the band Crowfield playing on it. This is a very exciting project! Stay tuned...Thanks so much to Ashley Furniture Industries, Inc. for its generous sponsorship! You guys rock!!