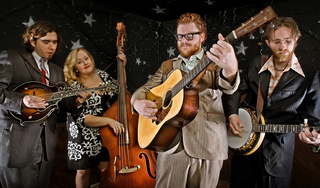 These musical road warriors have held tight to the bluegrass tradition, emulating the first generation greats while presenting a youthful, fresh sound. They eat, sleep and drink their craft within a musical community steeped in bluegrass. Never satisfied with the ordinary, these four voraciously search for unique or little-known songs, which they mold and shape through intricate instrumental arrangements and pristine vocal harmonies.

Spring Creek have two independent albums on the shelf, including 2008’s Lonesome Way to Go, expertly produced by Grammy award winner Sally Van Meter. The album has won praise from bluegrass critics and DJs alike, and can be heard on bluegrass radio all over the world.

Spring Creek are the 2007 Telluride and RockyGrass Festival winners, and are the first band to win both titles in the same summer. Their reputation for excellence made them the most in-demand Colorado bluegrass band this past summer, earning them spots at more than ten regional festivals. Their songs have already become local jam standards and have been covered by internationally touring acts such as Uncle Earl. In addition, the band's original crowd favorite "High Up in the Mountains" won the Vox Populi Award for Best Americana Song from the Independent Music Awards last year.