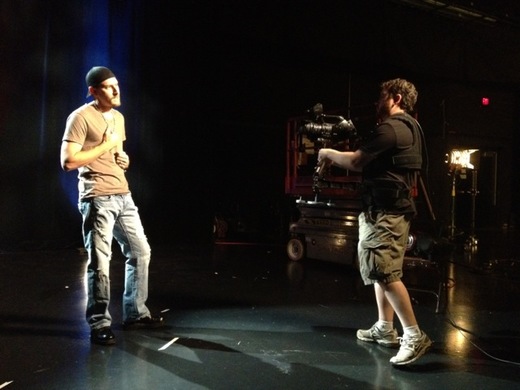 Steve Luscombe was born outside of St. Louis, Missouri in November of 1975. After being adopted, he spent the next 12 1/2 years growing up in Sikeston, MO. The son of a Church of Christ minister, Steve has always been around music. Gospel music has been a constant in his life and continues to be important to him to this day. From a very early age, Steve was singing. As early as kindergarten, he was performing in school plays and musicals. Music instruction was held in high regard where he attended school and was always one of the subjects he thoroughly enjoyed. As early as 8 or 9 years old, he began to help with the song leading duties at church through a young man’s training program at the church where his father preached. This only made his love for the beautiful harmonies that gospel music can bring grow even greater. As this love for music was sprouting, he also began to take interest in country music. The small town he grew up in held a rodeo every year. Each night after the events were completed, there was a concert held, with names like Loretta Lynn, Conway Twitty, Wille Nelson, Ricky Skaggs. Seeing these artists that he had been listening to on the radio perform live only made him want to be a singer even more. Steve felt the connection with country music. The passion and heartache, the humor and life. It was real life to him and he wanted to find a way to pass him feelings along through his music as well. Between his 6th and 7th grades years, his family moved to middle Tennessee. Once in school he got involved with the school chorus program and began competing not only with a choral group, but as a soloist. His teachers encouraged him to keep practicing and never let that passion for music die. On through high school he continued his musical education, but more on a personal level. He stepped away from the chorus program and began focusing more on country music, his real passion. After graduation in 1994, Steve had no real direction. That passion for music was still there, but what else was out there? Between 1994 and the present he has been everything from a cook and waiter, to a computer tech and plumbers assistant. Currently he works as a surgical tech at a children’s hospital, but music is at the forefront. His labor for the past several months Chances Are, his first independent CD release, is a mixture of upbeat, feel good country tunes and more touching, heart felt ballads. Steve has been married for 13 years to his beautiful wife, Lora. Since their marriage they have three little girls, Rylan who is 10, and Chloe` who is 9, and little Macie who is now 20 months old. Everyone in the family shares his passion for music, and has supported him through his musicial journey.