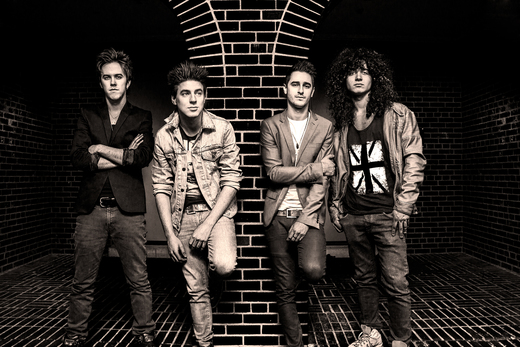 About The All Ways

Now, who is The All Ways?

The All Ways consists of lead vocalist, Austin Massirman, guitarists, Jon Colantonio and Ron Geffen, bassist, Billy Houlihan, and drummer, Steve DeNola. For being together for only a year, the band has accomplished many things and contains an interesting history.

In the winter of 2009, the spark that was soon to be known as "The All Ways" was ignited in the Rockland County, New York music scene.

It all started as a project between Austin Massirman and Ron Geffen. After working on some ideas together for a short time, they decided it was time to make these ideas into a reality.

Ron Geffen and Jon Colantonio met and became friends while attending college, and soon realized that they shared the same passion for music. They began creating more ideas together as a trio. After hearing some of the music the three had been writing, Billy Houlihan decided to join them on bass guitar. It was finally time to make these ideas and thoughts into reality, using the help of this newly found group of gentlemen.

After about a month together, a drummer was recruited, and The All Ways was transitioning more into a "band", and less of a "project". They were able record a 5 track demo for promotional use at concerts and over the internet. After playing many shows in and around their area and capturing the hearts of the local music scene, the band decided it was time to write and release a new record, and hit the road; and that's just what they did.

In their first summer as a band, "AW" released a 5 track EP titled, "Hot With Love", and booked a month long tour across the east coast, with help from their sponsor, Beast Attire. “Meeting all those new people, and giving them something to sing and dance along to, was one of the greatest feelings I have ever had," said Billy, when asked about his impressions of their first outing. After the month was over, the band returned home with only one thing on their mind: to do it again, but this time, bigger and better.

After some line up changes, the band recruited Steve DeNola as their drummer. Having been a touring drummer for Jon Anderson of the band Yes, Steve was the perfect addition to complete the band’s rhythm section. The boys have become a very tight-knit group, writing new music ever since, while continuing to play bigger and better shows.

The All Ways are constantly working hard and looking foward to a bright future ahead of them.