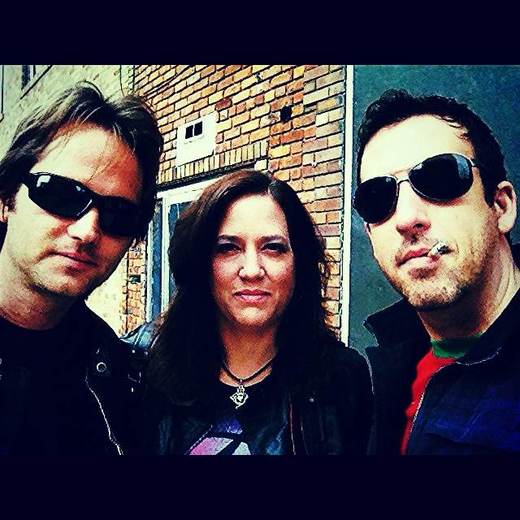 THE DIEMAKERS ARE: Dominic Harris- Vocals & Guitar | Jay Harnish- Bass & Vocals | Sharon Harris- Drums  The Diemakers are a Rock and Roll Band pure and simple. Emotive, Unpredictable, Heavy, Psychedelic, Bluesy, and Soulful. Combining classic influences and modern sounds into an original, gritty blend of Rock-N-Roll Freedom.  ASSAULT ALL YOUR SENSES: Legendary sound engineer Jim Diamond of Ghetto Recorders studio in Detroit, Michigan, recorded The Diemakers’ first release, Assault All Your Senses, and their latest release, an EP, Detroit Recordings. Bands such as The White Stripes, The Sights, and The High Strung have recorded with Diamond. The songs were recorded old-school style with the band together in the same room and laying down drums, bass, and the blazing guitar solos in one take. A warm, rich sound was achieved by recording on analog tape, rather than digitally recording. Assault All Your Senses is available on vinyl for those who appreciate the raw, honest sound of vintage records. The band will be going back to Ghetto Recorders in the summer of 2013 to finish what will be a full length Album.  BACKGROUND: Originally from Detroit, Dominic Harris and The Diemakers are now based out of Chicago. For the past decade, Dominic Harris and Jay Harnish have been playing in bands that have rocked renowned stages throughout the Midwest, including The Double Door (Chicago), The Rave (Milwaukee), The State Theater (South Bend), and The Intersection (Grand Rapids). After working on solo projects, they rejoined forces to bring back hard-hitting, dirty rock-n-roll. After an exhausting Spinal Tap-like search, the band found the drummer they were looking for right under their noses. Sharon Harris is Dominic’s wife. Sharon brought a Ramones-meets-Joy Division influence into the music. From the first jam sessions, it was obvious to all three that it worked. Everything clicked when they played together and, most importantly, it was Fun. The three share a musical passion and a bond formed out of friendship and love.  INFLUENCES: Impossible to include everything but favorites include David Bowie, Duane Eddy, Link Wray, Motown, The Yardbirds, Jimi Hendrix, The Stooges, T-Rex, The Ramones, BRMC, Band of Skulls, Jack White, and The Black Keys.