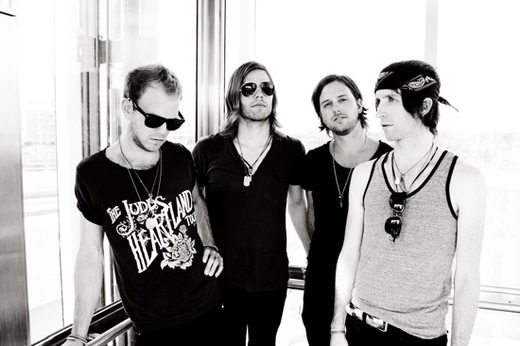 About The Kicks (Nashville)

The Kicks may be young, but they are quick to admit that in a decidedly non-hipster way, they do indeed plan to rock you. Never interested in moping, navel gazing or wallowing in the emotional muck and mire that permeates so much of the modern music culture, Jordan Phillips (lead vocals, rhythm guitar,) Adam Stark (lead guitar, keys, backing vocals,) Gabriel Anderson (bass, backing vocals) and Lucas Cummins (drums) intend to take your breath away with massive melodies, epic guitar riffs, irresistible rhythms and lyrics that practically force you to sing along. Though perfectly comfortable in clubs, this is music made for stadiums and with every intention that's exactly where The Kicks are heading.


“What initially inspired all of us to start this band,” Phillips recalls, “was the desire to create rock and roll music not only influenced by, but also played like rock and roll music used to be played. We grew up listening to McCartney, Queen, Aerosmith, The Beatles, The Stones, Faces, The Byrds, Foo Fighters, White Stripes, Petty, Springsteen and the other godparents of the genre. We wanted to play music that made us feel the same way those bands had.” Stark agrees. Having discovered the unbridled joy and freedom of the 60s and 70s era music his father played, he set his sights high. “There was such a spirit of freedom and exploration with the sounds in that music,” he conveys. “They were pushing boundaries and exploring uncharted territory. We wanted to pursue that pure energy – that raw excitement – and to share that connection with an audience.”

The Kicks came together after meeting in college in 2008. The chemistry was immediate and within just a few gigs the band became one of the most talked about non-Country bands in Nashville. Club audiences around Music City and the general Southeastern corner of the US grinned and grooved as these impossibly gifted and improbably young musicians delivered shows that regularly earned them favorable comparisons to their heroes. They earned coveted opening slots supporting heavyweights like John Mayer and Los Lonely Boys and performed at the Austin City Limits Festival and South By Southwest and the Van's Warped Tour. Their song “Good Morning” was heard by millions in a national television ad campaign for Lowe's and other songs were heard in shows like Vampire Diaries and Pretty Little Liars.

Four years, two independent records and countless breathless gigs later the band has delivered "Tonight Changes Everything", a new full-length album that continues to celebrate and honor the best rock and roll of the last half century while simultaneously embracing many of the most impressive aspects of today's modern music scene. With the guidance and expertise of Grammy Award winning producers Mitch Dane and Vance Powell (Jack White, Raconteurs, Kings of Leon) and a collection of guitars, amps and effect pedals that in other circumstances would qualify as a decent inventory for a boutique music shop, this third Kicks release is potent, focused, perfectly realized and brutally catchy. For Stark, Tonight Changes Everything accomplishes everything the band set out to do musically and lyrically. “From what we are singing to how we are singing it, this is a record about hope,” he says. “Hope is what sustains us through struggle and allows us to keep pushing through – even when we feel like we've got nothing left.”

“Yes we want to play arenas one day,” Anderson admits. “But we also want to make music that matters; genuine, authentic music that is a direct reflection of our hearts and minds.” The last four years of trench work has taught the band something important about the value of determination, resolve, encouragement and vision; all of which are on display in songs like “My Love Is Good,” “Hard to Believe” and the set's first track “Live Fast, Die Young.” Phillips feels that the band has tapped a new level of purpose with these songs. “We have spent the past few years asking ourselves the tough questions,” he adds. “Why are we playing in a band? What do The Kicks have to say?” The result is a batch of songs with a consistently upbeat, inspiring message of solidarity, optimism and determination to thrive in this world by helping each other along. In these trying times it's a message The Kicks feel still needs to be heard. “We aren't heavy-handed and self- important enough to think that whatever we write is going to be the most important thing anyone has ever heard,” Phillips adds, “But I do think that art with integrity is art with intent. Our intent is to leave people feeling better than before we played, that's all.”

With Tonight Changes Everything in tow and a renewed sense of purpose The Kicks are hitting the road with one clear objective; to take their already impressive live show to a new level and to help their fans have a blast. “We know that people comes to Kicks shows to have a good time,” Anderson admits. “They want to forget about their problems and stresses for awhile. It may sound silly, but we take that job very seriously. A little inspiration can go a long way.” With their big guitars, sweeping harmonies and indelible hooks The Kicks are ready to pursue this calling and take you along for the ride.