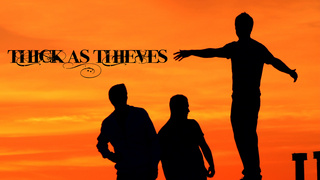 About Thick as Thieves

Thick as Thieves is the creation of lead singer Alex Mercier and MC Nick Richey. This tag-team represents the true meaning of “awesome”. Alex and Nick grew up in the Northwest but now claim Hollywood, Ca as their home, Thick as Thieves has exploded onto the music scene in a huge way performing for thousands of colleges and clubs nationwide. They have been called the hottest new duo in the college market today. Acoustic and electric elements mixed with rap and thoughtful lyrics make Thick as Thieves as unique as you can get.