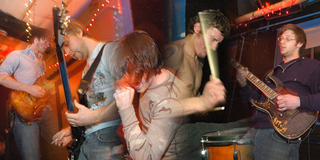 Based out of Portland Maine, Time for Change has been on the scene since early 2000. Starting as a 4 piece political punk band, we soon recruited the shredding power of muscle guns TJ
Cutting a cd with legend "nuts and bolts" tarbox of Shapleigh, Famous for recording a few of the Unseen albums, we toured a bit up and down the east coast in a huge P.O.S. van
When disaster struck and our leaf spring broke in the mid two-thousands, we paused to pick up the pieces of our shattered lives
Soon after Time for Change was forced to adapt to the style of a new rhythm guitarist and drummer. Now, in 2007, we have re-emerged as the all rock, no talk band that you hear today.