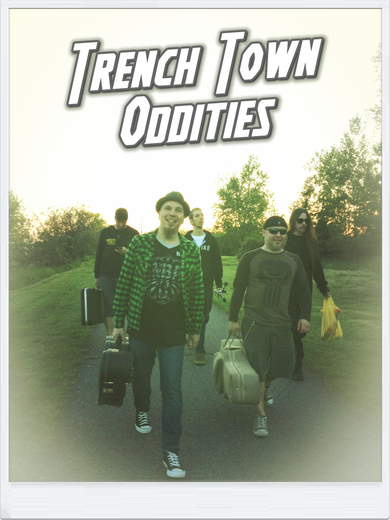 Never one to remain idle, front man Sean Harley - a staple on the Canadian indie music scene who past musical experiences include sharing the stage with some of North America's biggest acts (Sum41, April Wine, Headstones, Kim Mitchell, Glass Tiger, ect), recording in world class studios (Metalworks, Phase One, Distortion), not to mention having music picked up by various TV Shows (Witchblade), extreme sports videos (Snowmobiling Canada), and TV Appearances (Tom Green) - decided to start the Trench Town Oddities as way to get together with some musical buddies and have fun playing music without the pressures associated with trying to be the next big thing. Guitarist Steve R. was first on-board after the duo bumped into each other at a local music store. Having known Steve for a number of years but never having a chance to play together, Sean jumped at the opportunity to recruit such an exception guitarist. Next came Randy who previously played with Sean in a band called the Dub Dogz. Nick Kalil was next, who many not have been the first bassist for the Oddities but most definitely will be the last. Final, Todd Harrington was brought in to keep it solid on the drums.

So there you have it, the rules are simply... when at a Trench Town Oddities show have fun... and be prepared to party 'til the wee hours or the morning!