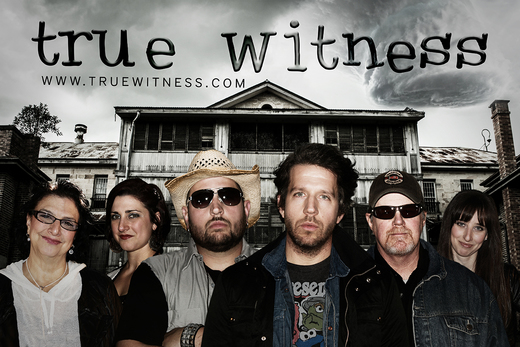 The multi-award winning True Witness is an Atlanta, Georgia USA based independent Rock band. Their progressive energy sound blends an imaginative slice of southern country rock and Gospel soul. After 5 years of mainly performing in the inspirational and faith-based surroundings, the band is shifting their energies back to their rock roots as a “band for the people” inspiring the mainstream secular markets.
In 2014, True Witness won three esteemed Rhythm of Gospel Awards for “Send Me” as the 2014 Special Event CD of the Year and 2014 Urban Contemporary / R & P CD of the Year. Their song and music video “Beautiful Soul” won the 2014 Rhythm of Gospel Music Video of the Year. In 2013, the band won the 2013 Gospel Choice Award for Best Artist Group and the 2013 Rhythm of Gospel Awards Video of the Year. They received a 2012 Inspirational Music Humanitarian Award for their songwriting, independent video documentary and performance work with the “Reach Project” In 2010, True Witness received a Grammy nomination by (NARAS) the National Academy of Recording Arts and Sciences for Best Rock Performance by a duo or group with vocals. They continue to perform and be involved in numerous award winning independent music video projects as well as main stage award shows.
True Witness originated as an acoustic Americana band in 2002 with Tom Bowen, and brothers, Tim and Dan Adams. Initially playing in coffee houses and bars, the high-spirited band enhanced their depth of inspirational, positive rock music by evolving with additional members into a significant touring rock band since 2007 performing throughout the New England / Northeast, Mid-Atlantic and the Southeast United States. Throughout the years and all their tour experiences, True Witness became very diversified, performing in coffee houses, famed bars and clubs, (Ace of Clubs NYC, Delancey NYC, The Masquerade Atlanta, GA) as well as large premiere Performing Arts Centers, (Caesar’s Palace Circus Maximus, Atlantic City, NJ, the 2013 and 2014 Rhythm of Gospel Music Awards Televised Main Stages. Dove and Stellar Award 2013 Showcases, Nashville, TN, Center Stage, Atlanta, GA) and large Mainstream and Christian outdoor festivals (Cherry Blossom Festival in Washington DC, SoulFest in NH, KingsFest in VA, Utica Music Fest in upstate NY). True Witness performed at the famous Rocket Town in Nashville, TN, multiple amusement parks and conferences such as Six Flags (NJ, NY, GA) Millennium Music, (Harrisburg, PA), Cape May Singer Songwriter in New Jersey. The band shot an award winning music video and performed at the famous Olympic Centennial Park in Atlanta, GA, and has had multiple appearances at the famous Atlantic Station in Atlanta. They were recognized as a Notable Winner in New York City’s premiere Musicians and Emerging Artist of New York (MEANY) festival 2009, and the band headlined many performances in the New England Region such as the July 4th, 2009 and 2010 Rochester Fairgrounds in Rochester, NH before relocating to Atlanta, Georgia. The band has performed and interviewed in multiple television appearances.
After writing and recording new material at the Full Sail University Studios in Central Florida, the band decided to establish their own independent True Witness Studios, as a full-service recording studio to support and develop other acknowledged independent artists. In March 2011, True Witness relocated from upstate New York to Atlanta, Georgia and energized a surge in their fan base by reaching out and extending their tours across the south and the nation. In 2011, the band released their award winning third CD, “Send Me” and returned back on tour. The group released two prior CD albums, “Once In Time” (2008) and “Origins” (2007 Faith-Based) and are currently finishing their fourth spirited rock CD project “I Have Arrived” with a release in 2016. They are currently releasing the title single, “I Have Arrived” in May 2016 for distribution with a creative music video.
January 2012 and 2013, True Witness performed and participated as Honorary Grand Marshals of the historic Martin Luther King, Jr. March Ceremony, in Atlanta, Georgia. Their passion is to bridge all mixtures of lives through music and lyrics and be identified as a dynamic rock band relating to all age ranges and genres on and off the stage. The band’s purpose is to reach out and impact the hearts of people everywhere through their lives and songs. Their thought provoking lyrics encourage and motivate an essence of forgiveness with a declaration of strength, faith and love to everyone surviving the challenges of each day. True Witness and their songs echo life, truth, and love while merging the spirit and soul with and a high-energy blend of acoustic and electric rock. A “must see” live show performance that captures an upbeat musical style uniquely transcending life’s struggles and offering plain solutions of hope in tough times.
Over the past 9 years, True Witness has toured and performed at all different types of musical venues, met amazing people throughout their travels, experienced the sights and taste of small and large cities while sharing their seasoned music with some great bands and artist. The band has built a considerable fan base in the Northeast, New England, Midwest Region and the Southeast, while regionally touring.