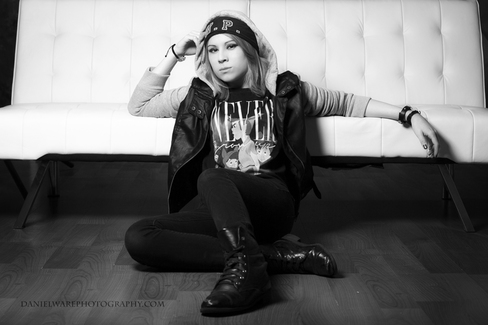 On the fast track to stardom, Whitney Peyton is a young, female, rapper from the suburbs of Philly, PA. Beginning close to home and expanding throughout the East Coast, she has used her stage presence to capture a diverse fan base leading to becoming the top voted unsigned artist in her home state on MTV2’s “On The Rise” contest. Proving her work ethic and determination, Whitney has worked with an array of established producers, including Leon Kidd (producer for 90’s hit rap group Major Figgas), John Johnson (New Kids on the Block), Chris Conway (Eminem, Mary J. Blige) and Eddie Galan (High School Music soundtrack).

Whitney has performed with well-known acts including Shop Boyz (“Party Like a Rock Star”), MIMS, Tech N9ne, DEV (“Like a G6”), Paul Wall, Vanilla Ice, and DMX. In the summer of 2009 Whitney Peyton teamed up with popular clothing chain Hot Topic and headlined her own mall tour playing in-store performances at over fourteen Hot Topic locations in four states where her T-shirts and other merchandise were being sold. After the well-received promotional tour came to a close Whitney wasted no time getting back on the road, this time with Platinum artist MIMS (“This is why Im hot”) as his opening act for multiple locations in Ohio and Michigan. She has collaborated on songs with Bizarre of D12, Gangsta Boo (formerly of Three 6 Mafia), Liquid Assassin (formerly of Strange Music), MIMS, Daddy X and Dirtball from Kottonmouth Kings and many more.

In 2010, Whitney was chosen to be one of the faces of Philadelphia’s “Unlitter Us” Campaign. In commercials airing city-wide on stations such as MTV, BET, Vh1, Comedy Central, ABC, and NBC. Whitney uses her rap ability in a spoken word poem she wrote about cleaning up the city streets. She is also featured in print and transportation ads, in addition to appearing along side Philadelphia Mayor Micheal Nutter at anti-litter rallies, and community events. Whitney’s passion for music and drive toward success ensures that her list of accomplishments continue to grow as fast as her following.