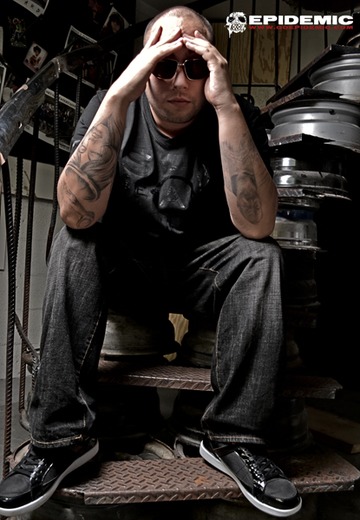 Who is Epidemic?
I’m a Hispanic rapper/lyricist from Miami.

Where can fans go to get your music and watch your videos?
www.GoEpidemic.com

Where did the concept for Epidemic come from?
I came up with the name when I was about 15 years old back in high school. Originally I was a very punchline-intense rapper, and I remember in a battle saying something along the lines of my words spreading like an “Epidemic”. A friend of mine told me I should stick to that name and have done so ever since.

What is the significance of the gas mask?
The gas mask is my logo. Along with being related to the whole Epidemic name, the original concept behind the mask is that it filters me from all the toxic music that I believe is out there. It allows me to be myself, free of influence, and remain uncontaminated. It’s the cover of my new mixtape, Second Exposure, and a similar mask was used as the cover of First Exposure which was released in 2006. It’s been part of my brand for a very long time so I just decided to incorporate more of it recently.

What style of music do you create?
On Second Exposure, I think you will be able to see a multitude of styles. One of the reasons I took so long to release it was to ensure that each style I decided to use had been fine-tuned to the point where I felt comfortable. I know the typical response to this question is “i got a million styles” when you ask a rapper, but I have a select few which I feel I use very well to get my message across. For example, I can openly admit that double-time flow is not a strength of mine, so I chose not to use it this time around. You will see that I can make a very lyrical record like “Emotionless” or “Angels Freestyle” or straight-up Dade county song like “Im a Beast Featuring Black Dada”. I can clown rappers with offensive and disrespectful punchlines like “Tell me what you want from me” Featuring Novaking or give you a very introspective genuine record about some past relationships like “Apologies”.