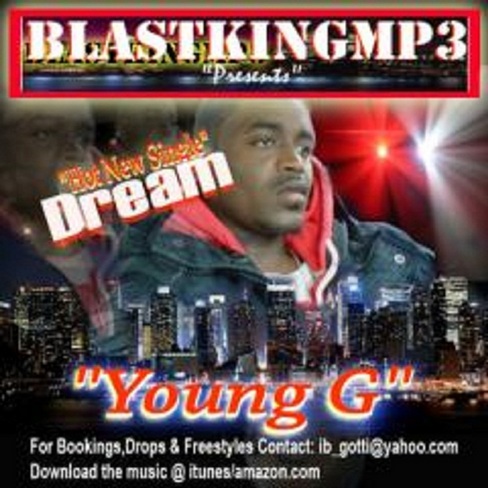 Young G. began his career in performing after studying music and social science in New Jersey. Young G. has performed hip-hop music in New York, New Jersey, and North Carolina. Young G. was just ten years old, when he began to fall in love with music. Tupac Shakur was Young’s idol rapper and an influence on his music career
Young G’s favorite memory in music was performing at Ms. G’s. There were about a hundred people in attendance. His performance and persona had people dancing and throwing their hands in the air with much excitement. This was Young G’s first time performing. The experience made him feel respected as an artist. He believes people love the type of music he is doing
Young feels as a rapper, he is able to write from the heart. He writes from his own personal experiences as well as current experiences. Young feels most rappers don’t do that. Young G. is smooth with what he is doing. Young’s music caters to listeners of the younger generation as well as the older. This makes Young G’s style different from the rest
Young G. likes how he can listen to a beat and write a song to it in as little time as twenty minutes. Young expects to be one of the hottest artists in the game. He strives to continue to be able to deliver his awesome style too the game
Young was raised in a single parent home with one brother and two sisters. His mother is a strong woman that pushes Young every day to better the quality of life, and be successful in his music career. Young’s father was a mentor in his life for a short period of time. Unfortunately his father has been incarcerated since his seventh grade school year. Young’s father showed him many things about becoming a man. In his father’s absence, the community helped raised Young G
Young’s best quality is handling business deals. Young produced his own album, which can be purchased online now. He started his own Indie label. Young’s worst quality is not pushing harder than he’s pushing now. He feels that’s the only way to the top, is by pushing hard. Young G. also writes movies, as well as music. Young has a movie manuscript ready for reviews
Young G’s goal is to become one of the hottest artists in the game. Young also plans to become a better business man. Another life goal for Young’s is to become an attorney. A lawyer is what he plans to be, if the music biz doesn’t work out. Young understands everybody can’t be a rapper. So Young continues his education, while trying to enter the game
Young G’s Contact Info: Ph#: 908-884-7219 - Email: Ib_gotti@yahoo.com
Website: www.myspace.com/youngmyspac