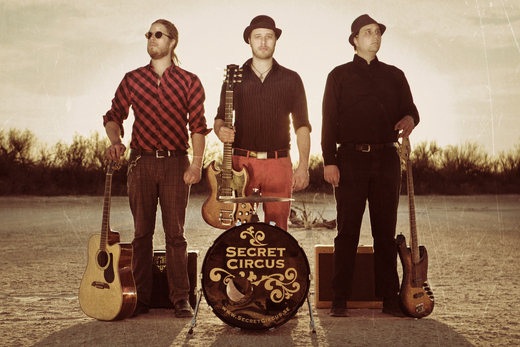 Honest songwriting filled with powerful and thought provoking lyrics. This great band makes Blues and Gypsy influenced Rock music with a vintage feel, yet an original and innovative style and sound... -it's music you like!

Klas and Joel Åhman -The twin brothers front the band. They take turn playing lead guitar, singing lead vocals and backing up with riffs and harmonies aswell as the  drums controlled by foot pedals. Oddly enough Klas lives in New Mexico, thousands of miles from the other members in Stockholm Sweden. But Secret Circus manage to use that to their advantage. Constantly traveling back and forth to eachother the twins are together more than appart. They record most of their material in their studio in New Mexico, but the live shows rock both sides of the Atlantic.

Martin Sternelius was born to be the perfect bass player. Always steady and tight, his playing fits perfectly into the mix and sparkles with brilliant fills. His personality mirrors his playing style: Calm, steady and reliable.

History: Secret Circus was started by twins Klas and Joel Åhman in 2008 in Stockholm, Sweden. The maiden voyage sent the brothers bumming around Europe, playing their way from town to town. They immediately discovered that music was their calling and decided they were going to give music their all. They quit their jobs and spent the following year writing and recording their debut album "This is Secret Circus". During that year they also picked up their cousin Martin on Bass. Since the start Secret Circus has toured Sweden and Germany an have a Europe tour and a US tour planned for the near future.

Future: Secret Circus is still unsigned and independent, but they are very driven and ambitious and are working hard to be "the most ill-kept secret EVER"! If you want to get our Newsletter and get info about shows in your area and stuff like that, sign up to our mailing list!

If you want to show us some support, check out our Webshop!