Reny is something, well, unique. He’s a beautiful guitar player, really squeezing every drop of soul out of that tinny, wild-sounding instrument with the metal pie-plate top. But he’s a helluva a singer and songwriter, too. And he comes at it from his beginnings as a rap artist, so his songs tend to have a modern-zeitgeist, social-protest bent (lyrically), coming at you through that gut-bucket, gut-wrenching ’30s resonator guitar sound that feels dirt-poor, mad and about 100 years old. It’s an odd mix. When Reny really gets going, he stomps his foot in a frightening, raise-twist-slap-down manner that makes you fearful he’ll break something (like his ankle). Reny’s wife, Lil’ Bell, really is lil’ (about 4 foot 8, and all of maybe 80 pounds). But she can play the drums like a ring in a bell, the perfect accompaniment to Reny’s spare, brimstone performances. SSR manage to forge their own sound and push musical boundaries in an era when many other musicians strive to sound the same.

Reny has recording everything from rock, pop, hip hop to reggae and of course the blues at various stages of his 25+ year career, with the last 12 years spent stcultivating that SSR sound...a blend of many elements including blues, hip hop, folk, rock and americana to name a few, and always weary of the traditions he represents, SSR navigates the modern musical landscape with a deep love for all that has come before, while still staying creative and vital, and constantly striving to make proud those who created that very framework on which his music is built. 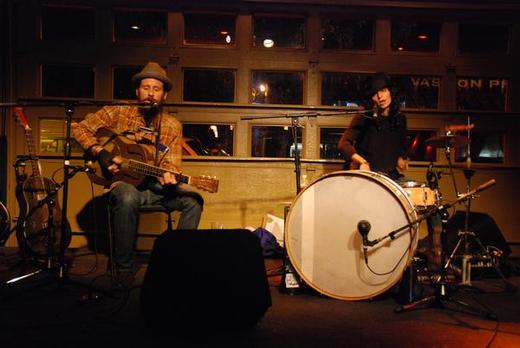