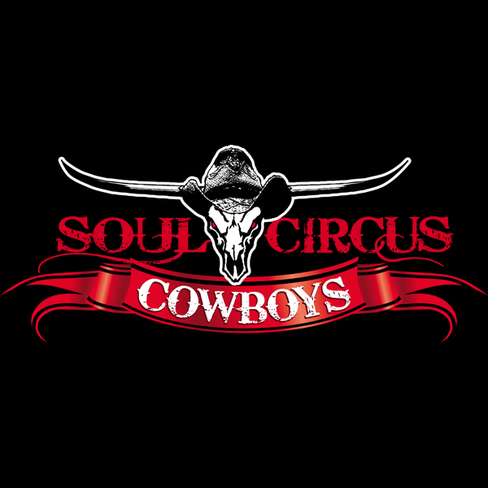 Bring together a group of musicians with a broad spectrum of tastes and influences and you’ll likely hear discord. But add their diverse array of life experiences to the mix and suddenly their differences start to complement each other. So it is with Tampa, Florida-based band, Soul Circus Cowboys. Their eclectic blend of musical styles and roads traveled make them one of the most unique new bands on the touring circuit.
“I found the best musicians in the area,” boasts Soul Circus Cowboys founder Billy McKnight, of his band mates. “And I do believe they are THE best musicians.”
“We are all multi-instrumental and have been playing music on the professional level for years,” adds drummer Jason Alfano. “We all work to make each other sound good.”
McKnight formed Soul Circus Cowboys in 2009, after several trips to Nashville during which he wrote songs with renowned artist/writer/musician Henry Paul, a founding member of 90s super group, Blackhawk. When McKnight returned to Tampa with that wealth of new material, he quickly set about searching for players he thought could breathe life into those new songs. In addition to Alfano, McKnight drafted Michael Bach to break it down on bass, Terry Cole and Stephen Haendiges to define the band’s signature guitar licks, and Greg Holt to fire up his fiddle. Before long, they recorded their debut album, Love’s Like A Rodeo.
Soul Circus Cowboys’ first single, Lay It Down, quickly established the band as a musical force to be reckoned with. Critics and fans praised the song for its message and authenticity, the band for its astute musicianship and the album as a collection of well-told stories, each crafted by songwriters who’ve “been there – done that.” The video for Lay It Down became a fan favorite on country music video channels, including Great American Country (GAC) and Country Music Television (CMT).
Love’s Like A Rodeo defined Soul Circus Cowboys’ signature sound by showcasing it as a brand new, high-performance, fuel-injected form of Southern Rock. Each track gives listeners a deeply personal peek at the raw honesty of each band members life of lessons learned the hard way. The album also showcases the band’s versatility, and McKnight’s previously under-appreciated vocal prowess.
Soul Circus Cowboy’s new album, That’s The Way We Roll offers an equally eclectic combination of sounds, styles and stories, all written (or co-written) by McKnight, the master storyteller. From the intense vocal delivery and to-the-point lyrics of She’s A Lot Like Whiskey to the emotionally wrenching, instrumentally charged If You’re Gonna Leave; That’s The Way We Roll rounds off the band’s rough edges, exposing a more polished, yet gutsier, grittier kind of country rock.
That’s The Way We Roll is a grown-up record that blasts through musical styles and genres, and offers something for just about every musical taste. Best of all, this album proves that the paths each member of Soul Circus Cowboys took to achieve their individual musical dreams have now merged into a single stretch of road that is certain to lead to an even greater level of band success.
They’re thoroughly genuine. They’re phenomenally talented. They’re the Soul Circus Cowboys.

Billy McKnight
Lead singer and songwriter Billy McKnight is no stranger to the music industry, having had national success as an independent artist. In search of a new project, he teamed up with producer Henry Paul, best known for his roles in southern rock bands Blackhawk and The Outlaws.

Jason Alfano
A life-long music student and teacher, Jason Alfano’s passion and drive allowed him to work with some of America’s best known artists and producers. He has also written several television theme songs, performed live on national television, and has inspired scores of up-and-coming artists of tomorrow.

Michael Bach
Country – Jazz – Metal - Top 40. During his storied 20 plus year career, Michael Bach has played them all with a variety of bands. And now, he plays bass and sings for Soul Circus Cowboys. His rock-edge style has helped the band create a sound that is unique to country music. He is also an accomplished piano and guitar player.

Terry Cole
Born in Kingston, New York, Terry Cole began his musical journey at the age of eight. His mother enrolled him in classes at the Kingston Music Center, later known as the Kingston Conservatory of Music. Throughout his early teens, he studied there with instructor Jerome Lehr. In 1973, Terry's dad bought him a Bentley, Les Paul Style guitar as a birthday gift. This was a milestone of what became a lifelong career in performing. Had it not been for the ongoing support of his parents, Terry is quick to say he may not be the musician he is today.

Stephen Haendiges
A skilled guitarist, Stephen Haendiges has played on countless recording projects in the course of his 20 year career. He has also played in some of America’s best known venues. Stephen handles both lead and rhythm guitar duties for Soul Circus Cowboys.