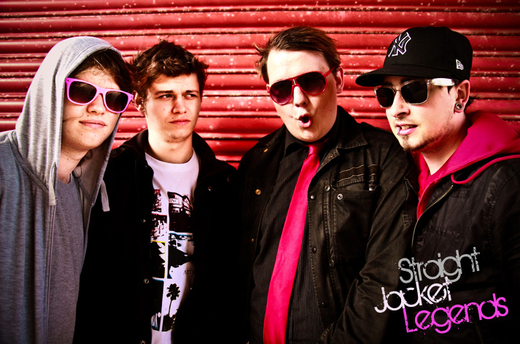 With a fusion of catchy power punk songs, orchestral power riffs and dangerously sic melodies it's no wonder why this band is called Straight Jacket Legends! The band has taken the catchy pop rock feel and mixed it with their own orchestral compositions to create the world’s ﬁrst Orchestral Power Punk Band.  Seeing the 4 piece band pull off a full on orchestral live sound is a show in itself. The powerfully energetic live performance of the band this is a show never to miss! Having the founder of the  'Jedi Church' as one of the front men, crazy catchy orchestral power pop tunes and a performance that would make Prince envious, there is a reason why kids are taking about Straight Jacket Legends!

Having their debut independent release hit iTunes " what's hot " compilation in Feb 2012 and getting the lead track promo video have a secure slot on Kerrang TV and Scuzz TV 2 of the biggest rock TV channels in the UK, things look good for Straight Jacket Legends.