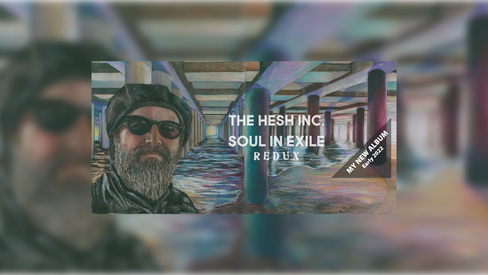 About The Hesh Inc.

The Hesh Inc. (led by singer, songwriter, and keyboard player Hesh Meister and sometimes assisted by a revolving-door cast of characters) performs songs about exile, redemption, self-actualization, and beach towns in the off season.

After a long, strange trip commencing on the South Shore of Long Island and threading through places like the Borscht Belt, Jerusalem, the Sinai Peninsula, Judea & Samaria, the Golan Heights, Boston, Philadelphia, the Jersey Shore, and Southern California, bringing his various experiences and influences with him from each place, THE HESH INC. now operates in the Greater NJ/NY area.
THE HESH INC. came into being when a 13-year-old Orthodox Jewish kid from Long Beach, NY named Heshy R dropped a quarter into a lucky charm imprinting machine at Lee's Arcade in Convention Hall on the Asbury Park boardwalk. From there it was a series of obstacles in a course consisting of learning in yeshiva, serving in the IDF, getting married and divorced, and moving about a dozen times, all while keeping up songwriting and performing in various capacities. Along the route, Heshy befriended many musicians from diverse genres, which eventually led to stints in rock, blues, reggae, and disco bands that played in clubs throughout the Middle Atlantic area. No stranger to the recording process, Heshy released several albums of original music during this period as well.
Eventually Heshy found himself in LA, where he managed to get some of his music placed in a movie despite his best intentions to avoid ‘the industry,’ but all in all his time on the West Coast was one of turmoil and he ended up back where he started—the beaches and boardwalks of the great northeast.
As of 2015, THE HESH INC. has eschewed the life of playing other people’s music and scuffling in local clubs in favor of finally recording the music that has filled his notebooks and imagination since that fateful day at Lee’s Arcade. The latest project is Soul In Exile 3: Love Runs Aground, the next installment of his magnum opus, released in March 2017.