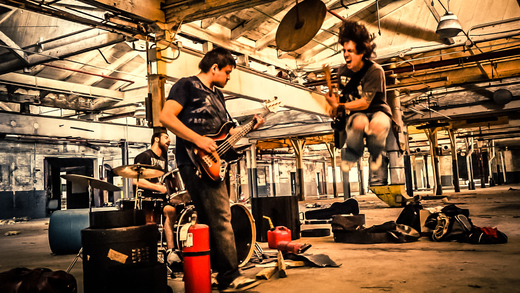 Certain DaZe is a group of accomplished musicians whose original music and lyrics are a display of imaginative power. With mesmerizing guitar solos, intricate rhythms, and powerful vocals, this rock band will have its audiences of every generation inspired and energized. Free your spirit and follow them into a Certain DaZe

This Chicago band has been rockin the scene since 2007 when Daniel Pouse, Kyle “BrickHouse” Pouse and Jaime Uriostegui discovered just how powerful the three of them together could be. Following a long line of storytelling greats such as The Doors, Jimi Hendrix, and The Red Hot Chili Peppers, Certain DaZe began making their own mark in history, playing local clubs and venues such as The Elbo Room, Reggies, and Durty Nellies. Seeing how well they jelled on stage, the three brothers were eager to translate those magical moments into a recording, so they quickly made their way into the studio, cutting their first EP “Magga Cammara.” (In the Bag Productions) Since then Certain DaZe has been signed by an Independent Label (2009) and released their first Official Music Video (JS Media).

Certain DaZe shares in the vision of their predecessors, making music that touches the heart and soul of the individual and society as a whole, awakening something inside that may have been fast asleep. Listen closely and you can hear their souls connect. Give into the music and your soul will drift to a whole new world inhabited by music and peace. Give into that Certain DaZe.