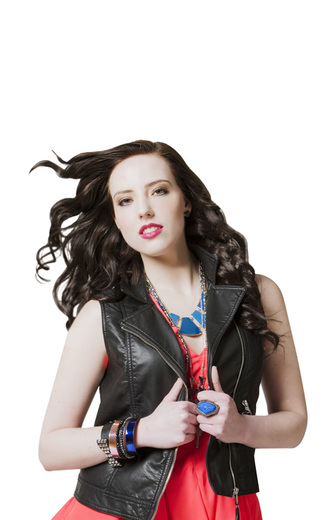 It’s been said that… “To truly become the best – you must constantly strive to surpass yourself.”

Michala Todd would concur with that statement, as evidenced by the fact that she is in the process of building a career in the performing arts that would adhere to this code.
To this point, she has worked with an impressive list of industry mainstays, in order to launch her career effectively from the outset. These names would include the likes of:

Her 2011 debut EP “Millions of Pieces” turned a lot of heads – saturating the North American airwaves with a fresh sounding energy and adolescent maturity not commonly heard. The single “Make It Work” was released internationally with a supporting video, while “House of Glass” was released domestically in her native land of Canada. Michala co-wrote five out of six of the songs, and cut her compositional teeth in the process. Since then, she’s been writing consistently with a variety of co-writers, enjoying the process as much as the end results.

“I am growing as a songwriter and my new material reflects this. I’m going a little edgier. It’s still pop, it’s still the kind of music I am known for, but I am experimenting, both lyrically and musically,” states the tender nineteen year old. Her upcoming single “Trance”, would reflect those sentiments. It’s a song that’s certain to be destined for the radio driven dance floor, as a pulsing rhythm section marries itself to hypnotic lyrics, that will send the listener into – well…you get the picture.

Along the way, this multifaceted artist has demonstrated considerable talent on the musical theatre side of the tracks, starring in a feature production that played to capacity crowds in the Toronto area. Her acting skills were well polished in the process, and she looks forward to potentially having similar opportunities down the road.

She is becoming more fluent on both the guitar and piano, seeing these instruments as her primary palette of expression as a songwriter. These two skill sets readily compliment her long term study of voice and dance, and altogether will work to enable Michala to be the consummate artist.

If there’s one thing that would rival her heart for performing, it would be captured in her heart to inspire young people to stay on the right track, make good decisions, and reach for their dreams with unbridled passion. She has been doing this for many years through an organization called D.A.R.E. (Drug Abuse Resistance Education), and as recently as last summer was honored in Atlanta with the Queen Elizabeth II Diamond Jubilee Medal, for her steadfast support of the program, by the giving of her time and talent.

“I travel to elementary schools around the country and sing inspiring songs, talking to students about following their dreams and staying on the right path. I’ve met so many kids who have big dreams like I did when I was their age. It’s so rewarding.”

Aside from her desire to relate to students, she is also passionate about connecting with her ever-growing fan base. She’s a social media fanatic, and loves to keep her finger on the pulse of what her audience is thinking and talking about.

“With pop music, I think you can really make a unique statement. I want my music to make people smile and dance – and generally feel good all over. But I also enjoy giving them something to think about. And I intend on doing that for a very long time.”

And there’s little doubt - that with her heartfelt resolve and resounding voice, Michala Todd will be running off the lips of music fans for many years to come.